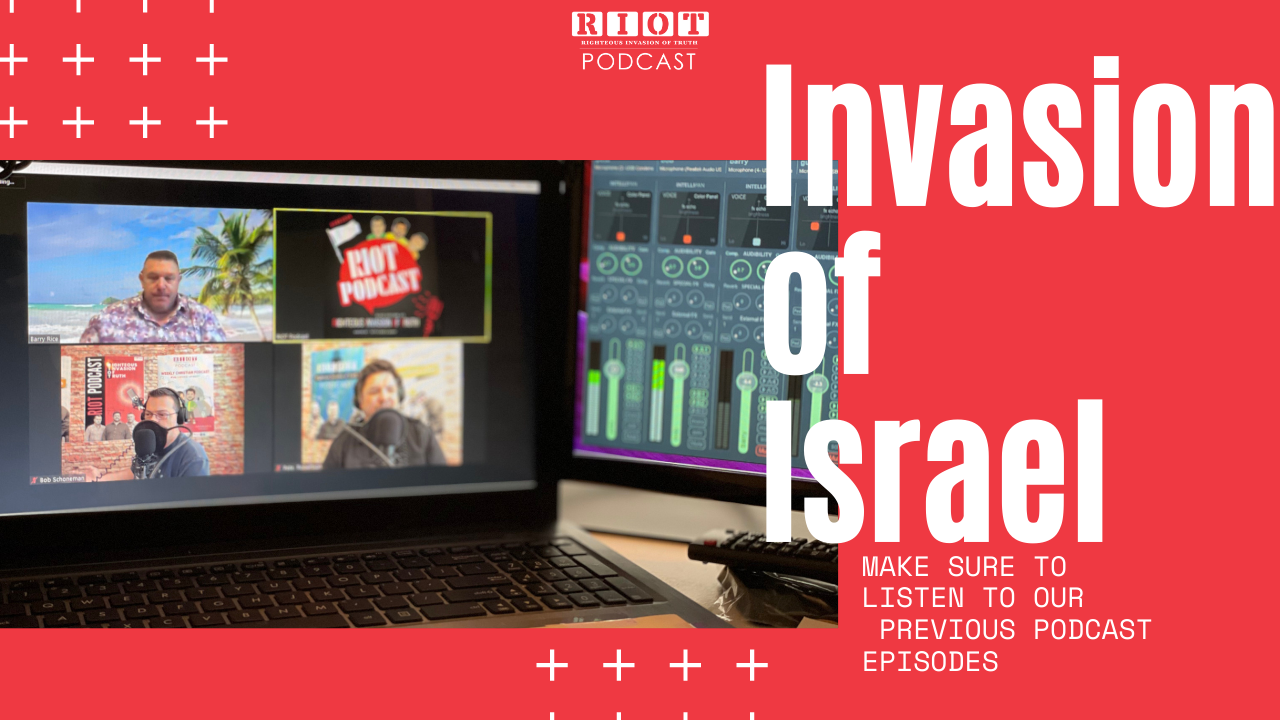 Christian Podcast: End Times – Prophecy Invasion of Israel Thank you for joining us this week on the RIOT Podcast, The guys continue speaking on Prophecy and End Times as they go through a book called “End Times in Chronological Order” by Ron Rhodes.

Bob, Pete, and Barry started the show by Talking about Barry’s Birthday since he’s not in the studio with the guys. Barry talked about how happy he is Celebrating his birthday with his mom and family because he is not able to see his mom for over a year because of the Pandemic. Bob then asked about St. Patrick’s Day and then Pete shared that St. Patrick has a significant role in the early Christian church that’s why Mission Travel Tours, one of the travel companies that Pete is running they put together a St. Patrick kind of tour that goes to Ireland and study its history.

The guys then shared some bible quotes and bible verses:

“If we don’t have Christ at the forefront of what we say, if the Holy Spirit is not leading OUR STORY, it’s pointless to do anything. In our everything, it should always be about Christ.” - Pete

The show moved on to the topic of what happens with the Invasion of Israel. The guys believe that after the church has been rapture there is a significant time that takes place before the Tribulation begins. During that time they believe that there is an attack on Israel that happens and today the boys will discuss why they believe this. To be clear this attack is not the final battle of Armageddon. What has to be in place before the attack? Israel will feel secure and semi-safe- Ezekiel 38:8 says Israel will dwell securely in their nation. Once they feel secure, Israel will be invaded by a Northern Military Coalition; we find this evidence in the book of Ezekiel chapters 38-39. Ezekiel 38:18-19 mentions God's wrath and anger toward the northern military and the words used to express the intensity of God's vengeance against them.

Here are the main key points of how did God and Israel Defeat them:

1. An earthquake – Ezekiel 38:19-20 says “the mountains shall be thrown down and the cliffs shall fall, and every wall shall tumble to the ground. Many will die here.”
2. Infighting- Ezekiel 38:21- Says that everyman’s sword will be against his brother ( John Walvoord said- In the pandemonium, communication between the invading armies will break down and they will begin attacking each other. Confusion of language
3. Disease- Ezekiel 38:22 The earthquake, infighting will leave countless dead. Roads closed, destruction all around and lack of medical help can cause this.
4. Torrential rain, hailstones, fire, and burning sulfur- Ezekiel 38:22

They also stated that there are 4 reasons why we feel this invasion takes place after the rapture and before the tribulation begins:

1. The world will likely be in a state of Chaos following the rapture of the church. This will have a huge effect on the US. We believe this is when Russia and its Muslim allies may attack Israel.
2. Once God Destroys Russia and Muslim invaders, this opens the door for the rise of the antichrist.
3. Now that the Muslim invaders are destroyed before the tribulation begins, the antichrist can easily sign a peace treaty with Israel (Daniel 9:27​)
4. Now that Muslim invaders are defeated the Jewish temple can be built in peace.

Overall this episode was very powerful and informative, especially if you’re curious about the End Times. You should also listen to their previous podcast episodes so you could also understand the Topic. Thanks for joining us this week!