How can the Resurrection of Jesus change your life? 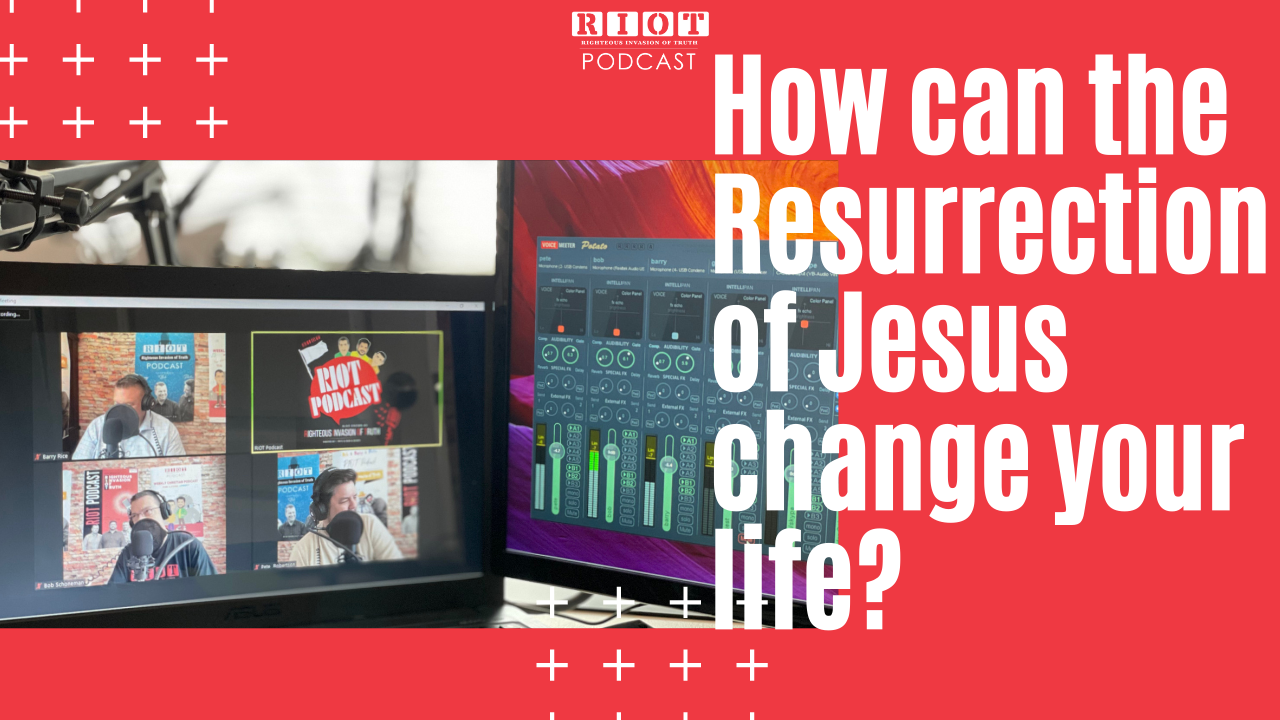 Thanks for joining us this week on the RIOT Podcast, a Christian podcast talking about today’s hot topics! Today the guys will be discussing the resurrection of Jesus Christ and that it is the central truth of the Christian faith. Without it, there is no such thing as the Christian faith.

Bob, Pete, and Barry began the show by introducing themselves and talked a bit about April Fool’s Day. Pete then shared that his Son, when he was a teenager he pulled an April fools joke on him way back when. Pete fell for it until his son told him “April Fool’s”. Then the guys talked about chocolates and their favorite easter candies, they all seemed to confess that they like Reese’s peanut butter cups! (LOL these guys get along so well) Bob then asked Barry what he feels about easter eggs, bunnies, chocolates, and candies if it’s a distraction or a tool for the meaning of Easter. Barry replied “It’s dumb, but it’s not dumb, because if you can use an egg to bring people to church and get them to hear the gospel then it’s not dumb.” (This guy is really funny, HAHA) Pete then interjected his thought that doing an easter egg hunt is a way to bring people closer to God.

After they were all talked out on bunnies, eggs, and chocolates the guys continued the show by talking about the power of the Resurrection and what that power means for Christians today, the artifacts that prove the happenings of the crucifixion, and His resurrection.

During the show they expounded on the following verse and a quote from John Stott:

Philippians 3:10-11 AMP “And this, so that I may know Him [experientially, becoming more thoroughly acquainted with Him, understanding the remarkable wonders of His Person more completely] and [in that same way experience] the power of His resurrection [which overflows and is active in believers], and [that I may share] the fellowship of His sufferings, by being continually conformed [inwardly into His likeness even] to His death [dying as He did]; 11 [a]so that I may attain to the resurrection [that will raise me] from the dead.

If a person dies, will they live again? (Job 14:14​). "Is this life all that there is? Or is there life beyond the grave? The Apostles believed in his resurrection to their Death. They died because of their faith. Who does this unless it is true?

Here are the main key points:

Peter and Paul: Both martyred in Rome about 66 AD, during the persecution under Emperor Nero. Paul was beheaded. Peter was crucified, upside down at his request, since he did not feel he was worthy to die in the same manner as his Lord. Andrew: went to the "land of the man-eaters," in what is now the Soviet Union. Christians there claim him as the first to bring the gospel to their land. He also preached in Asia Minor, modern-day Turkey, and in Greece, where he is said to have been crucified. Thomas: was probably most active in the area east of Syria. Tradition has him preaching as far east as India, where the ancient Marthoma Christians revere him as their founder. They claim that he died there when pierced through with the spears of four soldiers. Philip: possibly had a powerful ministry in Carthage in North Africa and then in Asia Minor, where he converted the wife of a Roman proconsul. In retaliation the proconsul had Philip arrested and cruelly put to death. Matthew: the tax collector and writer of a Gospel ministered in Persia and Ethiopia. Some of the oldest reports say he was not martyred, while others say he was stabbed to death in Ethiopia.

Bartholomew: had widespread missionary travels attributed to him by tradition: to India with Thomas, back to Armenia, and also to Ethiopia and Southern Arabia. There are various accounts of how he met his death as a martyr for the gospel. James: the son of Alpheus is one of at least three James referred to in the NT. There is some confusion as to which is which, but this James is reckoned to have ministered in Syria. The Jewish historian Josephus reported that he was stoned and then clubbed to death.

The reason why the Gospel is still being preached today is that the Resurrection did happen. It’s the cornerstone in everything we believe.

So according to Paul, if Christ didn't raise form the dead then the following would be true: Christian preaching is empty and so is anyone's faith because the object of the faith, Christ, is not who He said He was. The apostles are liars for testifying to a resurrection that did not occur. No forgiveness has been granted for anybody's sin. Those who have died believing in Christ have no hope. The hope in Christ is limited to this life, Christians are to be pitied above all people. There Is No Meaning For Humanity If Christ Has Not Risen Without the resurrection, Christianity has no meaning for humanity - its founder would have been a liar and a failure, and its followers would have no hope. Thus the importance of the resurrection to the Christian faith cannot be overestimated.

So how does the resurrection of Jesus change lives?

The Resurrection Was Unique To Christianity, The resurrection of Jesus Christ is unique to the Christian faith - no other religious figure has ever predicted his resurrection, and then accomplished it. All other world religions are based on a founder who lived in the past and whose religion is his only legacy. Mohammed died at age 61 on June 8, A.D. 632 in Medina. He is still dead. Confucius died and Buddha also died. They also remain dead - Jesus Christ is alive!!!

Overall, this is a great and unique topic that needs to be talked about. The guys shared all of their sentiments and knowledge about it and it was a whole lot of fun and informative!