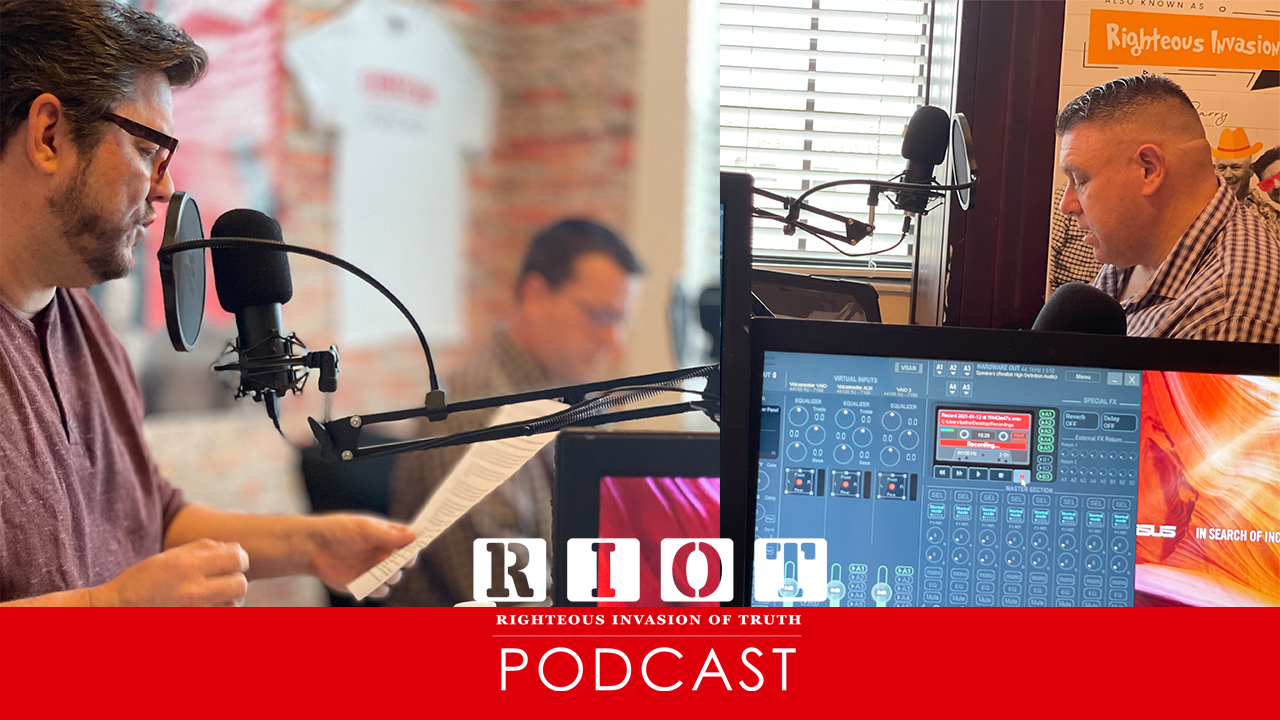 This week’s Christian Podcast show from the RIOT Podcast was powerful right from the get-go, the boys were not much into small talk and got right into this week’s pressure point topic.

They started the show off by asking each other how things were going and they each stated that they were kind of down and heavy-hearted. You can definitely sense the heaviness in the studio as each one of them shared their thoughts on the Capital Riot from the following week. Pete and Bob shared how they felt like they were mourning for the nation. Pete shared how he has been in prayer and in a funk, and realized it was because of all the turmoil that is going on in the US currently.

The boys went right to the source of all that was taking place, they called out the evil that was happening and condemned the rioters for doing what they have done.

A key statement that was made was:

“The capital Riot was horrible. All that was done was because of people’s political views, but there lies the problem in itself. It would be a tragedy to get the right president, the right Congress, and the wrong Christ. Our voices and actions are with limited power if it is not centered in Christs’ love. Our actions should always reflect that of God’s truth. Anarchy and chaos are never ok and especially not of God.”

From there Pete, Bob, and Barry spoke about how Social Media played a big part in all that has taken place. They mentioned the documentary show on Netflix called “Social Dilemma” and how that documentary shows how the top social media companies manipulate what people see. The conversation was centered on why we have such a divide in how people view politics. The hosts mentioned that the political “right” only sees what the “right” wants to see and the same goes with those on “left”. Social media has set things up so that people only see what they are interested in based upon their search history, comments, likes, and shares. Citizens are not given both sides' points of view and Pete, Bob and Barry mentioned that our ability to talk with the other side has all been but eliminated because of this issue. They encouraged their audience to watch the “Social Dilemma” documentary because of its insight and relevancy to all that is taking place in the world today.

The show moved on to the topic of “Hypocrisy” and everything that is being said from the Media and from Political figures. Pete made a statement before he read something that someone had posted relating to Hypocrisy. Pete said “Before I read this, I want our listeners to know we support whoever the President is, we are not conspiracy theorists, nor do we condone hate or any evil by anyone. We desire to walk in love and speak the truth the best we understand it. The statement I am about to read is someone’s opinion, but it points to a bigger picture that we will discuss after I have read it.

A statement that was read:

“No matter how I vote, no matter what I say, lives are never going to be the same.

I have been confused by the hostility of family and friends. I look at people I have known all my life so hate-filled that they agree with opinions they would never express as their own. I think that I may well have entered the Twilight Zone.

You can't justify this insanity. We have become a nation that has lost its collective mind.

We see other countries going Socialist and collapsing, but it seems like a great plan to us.

Somehow it’s un-American for the census to count how many Americans are in America.

People who say there is no such thing as gender are demanding a female President.

Universities that advocate equality, discriminate against Asian-Americans in favor of African-Americans.

Criminals are caught-and-released to hurt more people, but stopping them is bad because it's a violation of THEIR rights.

After legislating gender, if a dude pretends to be a woman, you are required to pretend with him.

It was cool for Joe Biden to "blackmail" the President of Ukraine, but it’s an impeachable offense if Donald Trump inquiries about it.

People who have never been to college should pay the debts of college students who took out huge loans for their degrees.

Immigrants with tuberculosis and polio are welcome, but you’d better be able to prove your dog is vaccinated.

Irish doctors and German engineers who want to immigrate to the US must go through a rigorous vetting process, but any illiterate gang-bangers who jump the southern fence are welcomed.

$5 billion for border security is too expensive, but $1.5 trillion for “free” health care is not.

And, pointing out all this hypocrisy somehow makes us "racists"!

Nothing makes sense anymore, no values, no morals, no civility, and people are dying of a Chinese virus, but it is racist to refer to it as Chinese even though it began in China.

We are clearly living in an upside-down world where right is wrong and wrong is right, where moral is immoral and immoral is moral, where good is evil and evil is good, where killing murderers is wrong, but killing innocent babies is right.

Wake up America. The great unsinkable ship Titanic America has hit an iceberg, and is taking on water and sinking fast.”

The boys discussed back and forth their thoughts on this statement and the views on how American Politician’s on both sides fall prey to this hypocrisy. They referenced 2 Chronicles 7:14 and discussed the significance of it, the verse says “If my people, which are called by my name, shall humble themselves, and pray, and seek my face, and turn from their wicked ways; then will I hear from heaven, and will forgive their sin, and will heal their land.”

The highlight of the show was when they moved the topic to How big our God is! They made the statement “Our focus needs to be on a Big God, not on the big chaos, He is bigger than all of this.” They mentioned how God is- Omnipotent, Omnipresent, Omniscient, that He is all-powerful, all-present, and all-knowing.

The guys then discussed Bible verses such as:

Isaiah 40:28 Have you not known? Have you not heard? The Lord is the everlasting God, the Creator of the ends of the earth. He does not faint or grow weary; his understanding is unsearchable.

Job 3:26:14 Behold, these are but the outskirts of his ways, and how small a whisper do we hear of him! But the thunder of his power who can understand?

Psalm 147:5 Great is our Lord, and abundant in power; his understanding is beyond measure

Psalm 8:3-4 When I look at your heavens, the work of your fingers, the moon and the stars, which you have set in place, what is man that you are mindful of him, and the son of man that you care for him

Luke 12:7 Why, even the hairs of your head are all numbered. Fear not, you are of more value than many sparrows.

Jeremiah 1:5 Before I formed you in the womb I knew you. And before you were born I consecrated you; I have appointed you a prophet to the nations

Deuteronomy 10:17 For the Lord your God is God of gods and Lord of lords, the great, the mighty, and the awesome God, who is not partial and does not take a bribe

Overall this episode of RIOT Podcast was very powerful and impacting, especially to those desiring a more intimate relationship with God. I highly recommend this Christian podcast, you will be blessed by it!